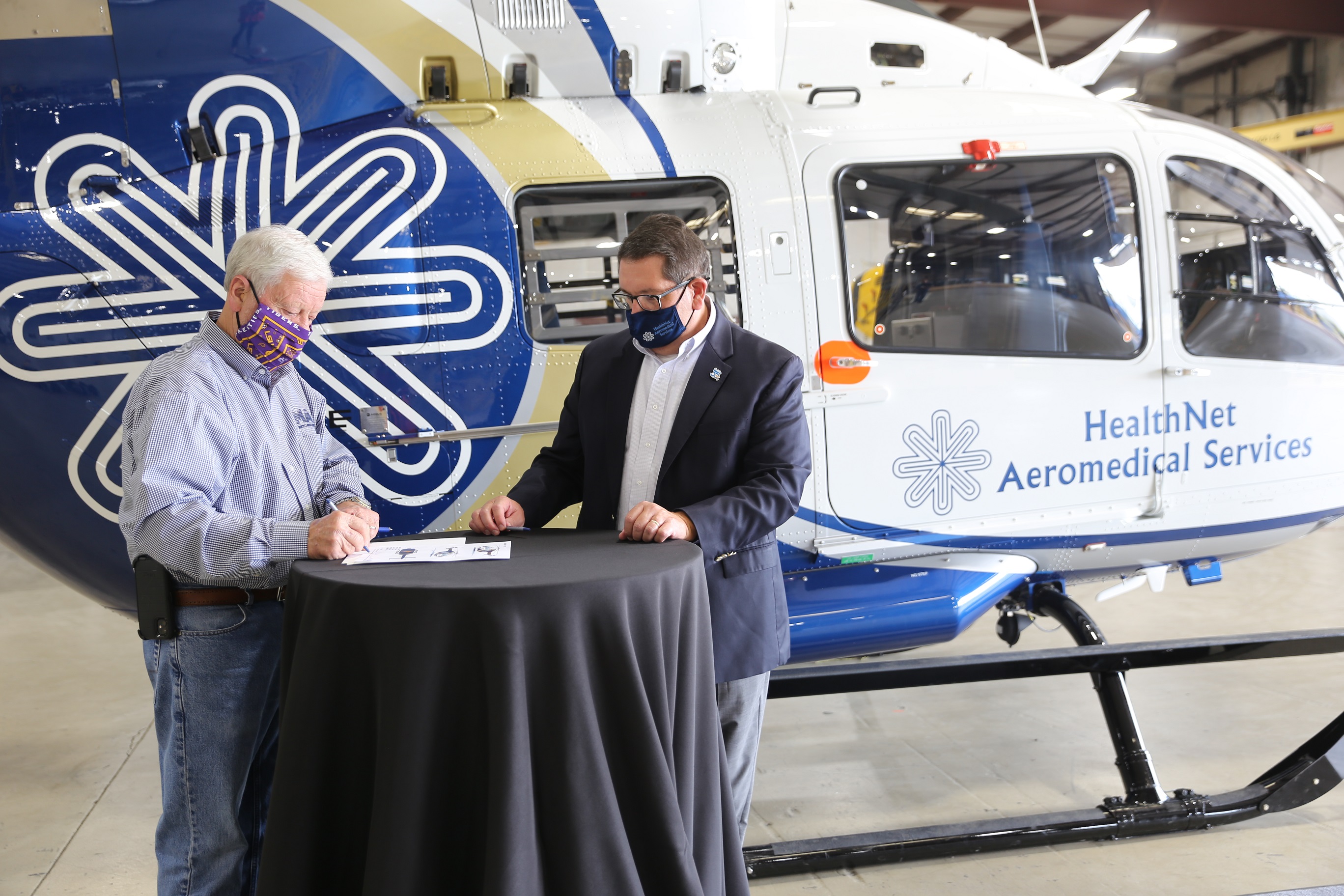 HealthNet Aeromedical Services is once again expanding its fleet with the addition of a new EC145e to serve Northern West Virginia. A purchase agreement has been signed with Metro Aviation with expected delivery of the aircraft in the spring of 2021.

“HealthNet Aeromedical Services and its owner health systems are pleased to place an order for another EC145e. This aircraft is undoubtedly the most mission-versatile and cost-effective helicopter air ambulance platform available. Its utilization within our fleet exemplifies our 34-year commitment to the delivery of safe, high quality, and cutting-edge transport medicine,” said Clinton Burley, president and CEO of HealthNet Aeromedical Services.

The new helicopter, which is equipped with the latest aviation and medical technology, will be based in Morgantown, West Virginia, and will replace the current EC145 serving WVU Medicine. The current aircraft will be relocated to HealthNet Aeromedical Services’ Moundsville, West Virginia base, improving critical care capabilities in WVU Medicine’s Northern Panhandle service area and beyond.

“Whether they’re coming from the scene of an accident or from another healthcare facility, the patients who are flown to us are often the sickest of the sick,” Albert L. Wright, Jr., president and CEO of the West Virginia University Health System, said. “The fact that this aircraft can transport two patients at a time and can be used for complex specialty transports means that these patients – from critically ill newborns to adults – can begin receiving the life-saving care they need as quickly as possible.”

"Few things in this industry are as important as the relationships that you build. One of the relationships that we’re so proud of is the one we’ve developed with HealthNet Aeromedical Services,” said Metro Aviation President and CEO Mike Stanberry. “They are front runners in the air medical industry and we’re proud to play a role in their program’s continued growth.”

The ceremonial purchase agreement signing took place in front of the EC145e purchased in 2019 which will serve the program’s Beckley, West Virginia base in support of Charleston Area Medical Center. HealthNet Aeromedical leaders traveled to Metro Aviation’s headquarters in Shreveport, Louisiana to do the final interior and exterior inspection of the aircraft which will officially go into service on August 26, 2020.